I am Not Your Bystander

This is something I wrote a few years ago…. As we all grapple with the murder of George Floyd and a myriad of African American people by the police and others I thought this again had relevance, pertinence, and was worth re-exploring.  I have visited this and updated it for today.

These are all our children.  We will profit by or pay for whatever they become.

It is a cloudy day in Los Angeles, and I am at one of our beloved clients.  As I weave my way through the parked white delivery trucks, I notice that much of humanity is represented here by the workforce going about their activities.  Everyone is represented, men and women of different races and ages all engaged and doing tasks.  Diversity is apparent as I walk into this urban workplace. 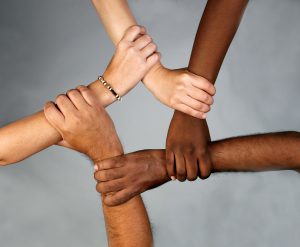 Recently, I saw a powerful movie called: ‘I AM NOT YOUR NEGRO’. The movie is based on the last writings of James Baldwin.  While I knew Mr. Baldwin as a prominent African American thinker, I did not know much about his writings.  One of the ideas that impacted me was the idea of institutionalized racism and poverty.

Yes, the urban workplace at my client’s is diverse, but the diversity is split, segregated along back of the house manufacturing jobs versus front of the house more executive and technical jobs.  This segregation usually occurs from lower paying jobs to the higher paying jobs.  The non-white folks are over there, and the white folks are over here.

Where does the segregation cycle start?  Mr. Baldwin suggests it starts with separate neighborhoods with high incidents of violence, poverty, and bad schools.  You know the neighborhoods that I am referring to.  People born into this kind of culture  likely to not be as economically successful as those born into more affluent surroundings.  If you look you can see veracity in this.  It is possible to overcome the circumstances and it does happen and it is not likely.

The research holds this up and it intuitively make sense.  This institutionalized racism is not just going away with people with the right attitude pulling themselves up in the workplace.  It is unfortunately a much more complex problem that.

Mr. Baldwin contends that the race debacle will not be solved if we think of it as those people versus us people.  Until it occurs as our problem involving our people and our children there is very little entrance into solving these problems.   In some ways, we must get beyond race to deal with race.  Another cut to this is to get over our white fragility in talking about race.

I am also impacted by a portion of the film “I AM NOT YOUR NEGRO” in which Robert F. Kennedy said progress was being made regarding the advancement of the negro.  He said that in forty years one of them could even be President of the United States.  The narrator commented that this would have been an intolerable statement if it had been made about whites or Jews, or Greeks etcetera.  That took me aback.  Why is it acceptable about anyone?

In business, our conversation is about controlling costs, the price of labor, running good businesses and making profit.   I do not think in terms of people having a living wage. Nor am I concerned if workers could support themselves and live somewhere where they could have access to good schools.  I do not think like that because workers are not my people; they are those people.  At best, it is the government’s problem, not my problem.  Not so much that I am out to do anything tangible about it other than feel bad.

It is revealing that during the Pandemic Congress raised unemployment benefits by $600 a pay period.  What does that say about what frontline workers are paid that they felt compelled to do this?  What is going on?

Does my Mexican housekeeper have a living wage?  Do I even care?  Am I out to just get the best deal that I can and pay as little as possible?  What if she was my people and her children were my children?  Having seen the movie, I discovered some things about my racism. This movie opened me up to confronting and being responsible for my racism.  When you look, there is no question that there is institutionalized racism in our neighborhoods, schools, and jobs.

People can and do impact the quality and destiny of their lives. There are countless inspiring examples of people who find themselves in very bad circumstances transforming and elevating their ability to succeed economically.   With that said, there is also a lot that I am rethinking.

Now what to do?  That is the question.  What can I do?   I am starting conversations with business owners.  This is my first effort.  What is our role in this?  Who are we going to be in the face of institutionalized racism and poverty?  How are we going to define a role for ourselves in the discussion about a living wage?  What is going to work?  Where is technology going to fit in?  The Pandemic and the murders of African Americans have elevated this conversation and put it on steroids.

What can I do?  What actions can I take beyond being bothered and overwhelmed by the sheer magnitude of this issue?  What can I influence?  It is easy to be a bystander when it is those people having issues. When I see it as OUR people having issues, OUR schools that do not work and OUR people who do not have access to jobs and safety then my world alters and a new view emerges.

These are all our children.  We will profit by or pay for whatever they become.